The Institute for Experimental Mathematics (IEM) was founded in 1989 with support of the Volkswagen Foundation as a central research institution of the university in order to bring mathematicians, computer experts and communication engineers under one roof. Since its establishment, the IEM contains the working groups

to improve the basic research in these areas. After broadband and high-quality networking of computer systems took a rapid development and attained a central role in particular for the researches at the IEM, the Alfried Krupp of Bohlen and Halbach Foundation funded an additional chair for computer networking technology. With the financing received for the five initial years, the university was in a position to set up a full professorship together with three research assistant positions at the IEM. On the January 1st, 1999, Prof. Dr.-Ing. Erwin P. Rathgeb began with the build up of the working group. On the April 21st, 1999 the new chair was officially introduced by Prof. Dr. h. c. mult. Berthold Beitz, chairperson of the committee of the Alfried Krupp of Bohlen and Halbach Foundation, jointly with Prof. Dr. Dr. h. c. Karl Rohe, rector of the university and Prof. Dr.-Ing. Erwin P. Rathgeb in a joint press conference in the house of the foundation. 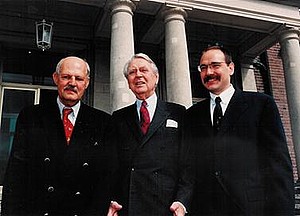