Research and teaching in networking technology require a multifaceted networking laboratory as fundamental infrastructure. Thus the chair of computer networking technology group built and operates two network laboratories. The technology used in computer networks does not operate isolated but always in distributed systems. Changes to single nodes always have an impact on the whole network, which is the reason why we require a networking infrastructure that provides technologies as diverse as possible, allowing us to demonstrate mechanics and protocols to our students as well as embedding special techniques and research projects into the network. For research purposes the network laboratory is the „real-life“ environment to our research projects. The network provides the required services and interfaces.

For a later port of our research projects to production networks an analysis of interactions with existing technology is essential. It is important to represent the whole network or rather the whole communication chain. Also analysis or simulation driven research activities require validation of theoretical results by measurements and experiments in network setups. 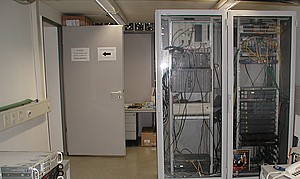 Researching the practicability of new concepts by prototyping implementations in a experimental setups contributes considerably by providing those concepts with newfound aspects and questions. Further, our teaching concept includes usage of the network laboratory for exercises and practicals to demonstrate concepts introduced in lectures.

Compared to other analysis-driven disciplines, students often have a harder time grasping the architecture and mechanism driven communication technology due to abstract concepts being the dominant methodology. By actually using modern network technology components, students are enabled to make the connection between taught concepts and applying those concepts in practice. Exercises and practicals allow students to broaden the theoretical knowledge gained in lectures by building network configurations on their own. 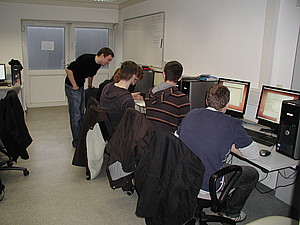 We aim to integrate most relevant networking protocols and techniques in the network laboratory with the least equipment possible. The plans for the current development stage already include a set of technologies: