Applications based on Peer-to-Peer (P2P) protocols have become tremendously popular over the last few years now accounting for a significant share of the total network traffic. With P2P overlays, services can be provided fully decentralized without the need for support in the network infrastructure. The Computer Networking Technology group is involved in research on different P2P overlay topologies and their dynamics as well as in investigations of user behavior and impacts on traffic management tasks. 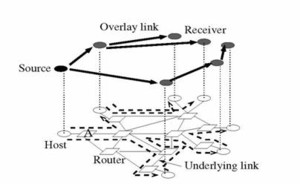 A peer-to-peer (or P2P) computer network is a network that relies on the computing power and bandwidth of the participants in the network rather than concentrating it in a relatively few servers. P2P networks are typically used for connecting nodes via largely ad hoc connections. Such networks are useful for many purposes. Sharing content files (see file sharing) containing audio, video, data or anything in digital format is very common, and realtime data, such as telephony traffic, is also passed using P2P technology. 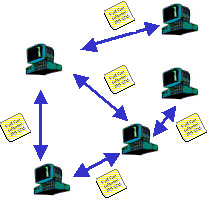 A pure peer-to-peer network does not have the notion of clients or servers, but only equal peer nodes that simultaneously function as both "clients" and "servers" to the other nodes on the network. This model of network arrangement differs from the client-server model where communication is usually to and from a central server. A typical example for a non peer-to-peer file transfer is an FTP server where the client and server programs are quite distinct, and the clients initiate the download/uploads and the servers react to and satisfy these requests.

Peer-to-peer architecture embodies one of the key technical concepts of the internet, described in the first internet Request for Comments, "RFC 1, Host Software" dated 7 April 1969. More recently, the concept has achieved wide prominence among the general public in the context of the absence of central indexing servers in architectures used for exchanging multimedia files.

P2P Networking raises lots of interesting questions and touches many research fields such as application and protocol development. The most fascinating nature of Peer-to-Peer Networks is their self-organization wich depends on the P2P routing algorithms. Apart from structered P2P networks the impact on real networks could not be exactly predicted.

Due to popularity of filesharing networks new applications and protocol modifications spread in a few days among millions of users, without exact knowledge of their impact from a global view.

We are interested in these global effects such as topology dynamics, traffic occurrence in network segments and the ability to influence this behavior.

Our research interests based on hybrid P2P networks are:

Therefore only three approaches exist which allow the study of these effects:

These are the tools we use to investigate the global behavior of P2P networks and the possibilty to influence them.